Five Myths About Shakespeare’s Contribution to the English Language

He is certainly important to English but he isn’t responsible for as much of it as you might think.

Shakespeare’s language is widely considered to represent the pinnacle of English. But that status is underpinned by multiple myths – ideas about language that have departed from reality (or what is even plausible). Those myths send us down rabbit holes and make us lose sight of what is truly impressive about Shakespeare – what he did with his words.

The Encyclopedia of Shakespeare’s Language project at Lancaster University, deploying large-scale computer analyses, has been transforming what we know about Shakespeare’s language. Here, incorporating some of its findings, we revisit five things that you probably thought you knew about Shakespeare but are actually untrue.

Well, he did, but not as many as people think – even reputable sources assume more than 1,000. The Shakespeare Birthplace Trust puts it at 1,700, but carefully add that this number concerns words whose earliest appearance is in Shakespeare’s works.

The word “hobnail” first appears in a text attributed to Shakespeare, but it’s difficult to imagine it arose from a creative poetic act. More likely, it was around in the spoken language of the time and Shakespeare’s use is the earliest recording of it. Estimates of just how many words Shakespeare supposedly coined do not usually distinguish between what was creatively coined by him and what was first recorded in a written document attributed to him.

Even if you don’t make that distinction and include all words that appear first in a work attributed to Shakespeare, whether coined or recorded, numbers are grossly inflated. Working with the literature and linguistics academics Jonathan Hope and Sam Hollands, we’ve been using computers to search millions of words in texts pre-dating Shakespeare. With this method, we have found that only around 500 words do seem to first appear in Shakespeare.

Of course, 500 is still huge and most writers neither coin a new word nor produce a first recording.

2. Shakespeare IS the English language 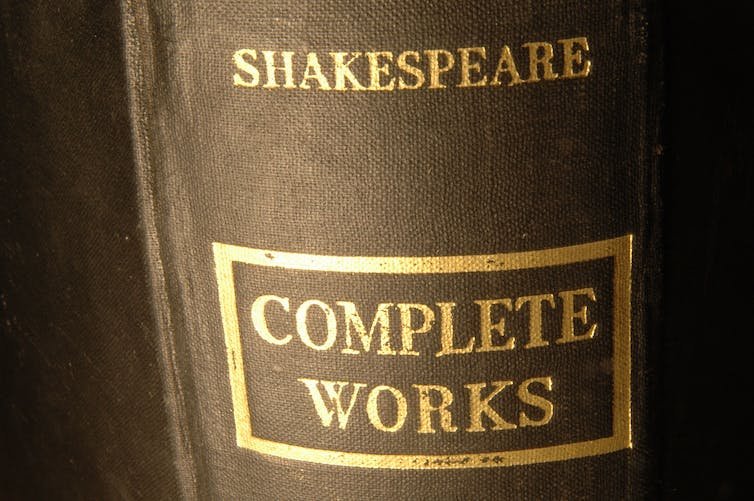 Shakespeare’s complete works could only ever have constituted a small proportion of the English Language. Jon Naustdalslid/Shutterstock

Even if every word within Shakespeare had been coined by him (which is of course not the case, as noted above), that would still only be 4.2% of today’s English language. So, Shakespeare could only ever have contributed a very small fraction, though quite possibly more than most writers.

3. Shakespeare had a huge vocabulary

Ludicrously, popular claims about Shakespeare’s huge vocabulary seem to be driven by the fact that his writings as a whole contain a large number of different words (as noted above, around 21,000). But the more you write, the more opportunities you have to use more words that are different. This means Shakespeare is likely to come out on top of any speculations about vocabulary size simply because he has an exceptionally large surviving body of work.

A few researchers have used other methods to make better guesses (they are always guesses, as you can’t count the words in somebody’s mind). For example, Hugh Craig, a Shakespearean scholar who has pioneered the use of computers for analysing language in literature, looked at the average number of different words used across samples of writings of the same length. He found that, relative to his contemporaries, the average frequency with which different words appear in Shakespeare’s work is distinctly … average.

Sure, some themes or aspects of the human condition are universal, but let’s not get carried away and say that his language is universal. The mantra of the historical linguist is that all language changes – and Shakespeare isn’t exempt.

Changes can be subtle and easily missed. Take the word “time” – surely a universal word denoting a universal concept? Well, no.

For each word in Shakespeare, we used computers to identify the other words they associate with, and those associations reveal the meanings of words.

“Time”, for instance, often occurs with “day” or “night” (for example, from Hamlet: “What art thou that usurp’st this time of night”). This reflects the understanding of time in the early modern world (roughly, 1450-1750), which was more closely linked to the cycles of the moon and sun, and thus the broader forces of the cosmos.

In contrast, today, associated words like “waste”, “consume” and “spend” suggest that time is more frequently thought of as a precious resource under human control.

The myths above are popular myths, spread by academics and non-academics alike (which is why they are easy to find on the internet). Myths can be more restricted.

Within some theatrical circles, the idea that Shakespeare didn’t know much Latin emerged. Indeed, the contemporary playwright Ben Jonson famously wrote that Shakespeare had “small Latin, and less Greek”. Shakespeare lacked a university education. University-educated, jealous, snooty playwrights might have been keen to take him down a peg.

Working with the Latin scholar Caterina Guardamagna, we found that Shakespeare used 245 different Latin words, whereas in a matching set of plays by other playwrights there were just 28 – the opposite of what the myth dictates.

That Shakespeare used so much Latin without a university education makes his achievement in using it all the greater.

Jonathan Culpeper is a chair professor in English Language and Linguistics at Lancaster University. Mathew Gillings is an assistant professor of economics and business at Vienna University.